Mr. Bullneck. Not that is hard headed or something (well he is that too), he's just built as a bull over his neck. It's like impossible to fit a necklace with a normal fit on his small head and fat bullneck. Either it sits normally on the neck - but then he can take it off. Or it's positioned high on the neck which just looks stupid. Luckily enough, he doesn't have to walk in a leash that often (thank god).

But we weren't suppose to talk about his neck here, there are a lot of other more important things to tell about this dog. He's been a solid lead dog since he was 10 months old, which was about the age he and a young Nanook took us over a mountain in full snowstorm without hesitation, where all other dogs but him and Nanook wanted to turn around - yet they pushed forward like there was no tomorrow. And until the day Nanook died, that's the kind of team they were. Unstoppable. At the age of 18 months, he started being a lead dog in skiing areas and learned how to do it as a pro from his teacher Doris (also a fenomenal dog). And while some dogs the like the pressure of running inside a skiing area with everything that happens there, he thrived upon it and still do.

As understood from above, this dog can go under all possible conditions without hesitation - he will lead the team where I want to with or without tracks. He's a long distance dog, breed for sprint but he never got trained as a sprinter, only long distance. And he has never ever had any problem with it.

Mentally he is quite stable, hard as a rock or bull if you'd like in his head. Which can make him a tiny bit hard to teach sometimes, at least it could be a problem when he was young but being an little bit older dog now, with more experience than most, it isn't an actual issue any more. We've learnt to live with each others faults and habits. For example, if entering his dog yard he will run towards ju and jump right at you  - feets first so stand your ground and be prepared. He does this because of happiness, and although he's a bit more calmer being quite a few years older now - he still does it. Not to kids though. Mainly to me. I might have fallen to the ground a few times, and I actually think he kind of think that is funny.

All in all, although he has a few habits and other things - the fact that he is an amazing dog and sled dog far overweights his small tiny bad habits. He's truly a kind dog, that really likes to sleep in the couch cuddling and loves all small living things - puppies or kids. And he might be the best sled dog I've ever ran. 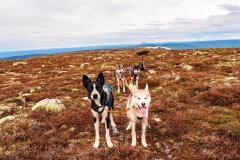 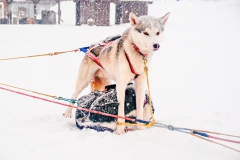 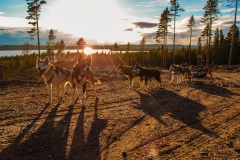 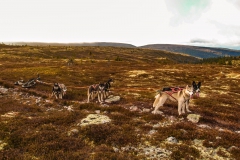 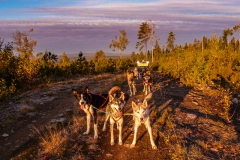 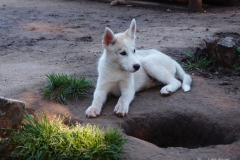